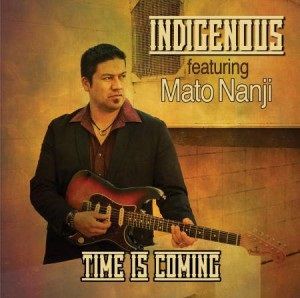 It has been a busy couple of years for Mato Nanji (his name is pronounced “Ma-TOE NON-gee”). His 2012 debut on the Blues Bureau International label, Indigenous featuring Mato Nanji, marked the beginning of his collaboration with noted producer, impresario and shred guitar fanatic, Mike Varney. The same year saw the release of 3 Skulls And The Truth,featuring Nanji, Los Lobos frontman David Hidalgo, and Luther Dickinson from the North Mississippi Allstars. In 2013, he collaborated with trance-bluesman Otis Taylor on Taylor’s My World Is Gone and released his own Vanishing Americans. In addition to touring his own music, Nanji has also been a member of the annual Experience Hendrix Tour Band since 2002. And now comes the new album from Indigenous featuring Mato Nanji.

Time Is Coming is Nanji’s 10th commercial release and third for Blues Bureau International. It’s also a cracking slice of Hendrix-inspired blues-rock. Born and raised on the Yankton Sioux Reservation in South Dakota, Nanji is a powerful singer and a solid songwriter. 12 of the 13 songs on Time is Coming were written by Nanji and his wife/lyricist, Leah (including three co-writing credits with Mike Varney). The sole cover is a fine version of Bruce McCabe’s “Good At Feelin’ Bad”. The centrepiece of the album, however, is Nanji’s guitar playing. Playing riff-orientated blues rock on a heavily over-driven Stratocaster, often with a wah-wah pedal, it is impossible to ignore the influence of Jimi Hendrix and Stevie Ray Vaughan. But as he tears at his guitar strings, bending and shaking them to within an inch of their life, it is clear that Nanji is no mere copyist. He is a genuine virtuoso, playing lyrical and emotion-packed lines, sneaking in between vocal lines, underscoring the melodies, and flying over the solo sections. There is a lot of guitar on this album.

“Good At Feelin’ Bad” is the only song on the album that comes in under the 4 minute 15 second mark.  The majority of the songs last around five or six minutes, which gives Nanji plenty of time to stretch out with his solos.

Indigenous usually features Nanji, Derek Post on guitar and vocals and Charles Sanders II on drums and keyboards, but the band on Time Is Coming comprises Jesse Bradman on keyboards and backing vocals, Steve Evans on bass and Jeff Martin on drums. They do a fine job of providing support to Nanji.  Martin in particular lays down some absorbing patterns. Bradman’s keyboard work adds depth and lustre to the songs, as well as adding to the overall “retro” feel of the album.  The organ on “I’m Telling You” is reminiscent of Jon Lord with Deep Purple or Ken Hensley with Uriah Heep, and “Around The World” could have been included on some of Eric Clapton’s mid- to late-80s albums.

Time Is Coming may not appeal to everyone. It is closer to rock than to blues. But the blues is at the heart of all of its best parts, of which there are many. Recommended for fans of guitar-driven blues-rock, particularly if you enjoy the work of Jimi Hendrix, Stevie Ray Vaughan, Doyle Bramhall II or Chris Duarte.