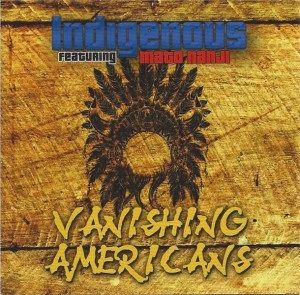 Indigenous is a noteworthy rock group led by a sincere blues man and Native American, Mato Nanji. The band’s music is laced with the problems and harsh realities of reservation life, and Nanji’s Native roots can be found in each song; however, his undeniable, raw talent and respected nature certainly go above and beyond all racial and cultural barriers and boundaries. Vanishing Americans is a fantastic blues album that any guitarist, blues fan, or rock star could commend. Each song is brought together with heavy and powerful guitar riffs akin to those of Carlos Santana and Jimi Hendrix, while bellowing, raspy vocals turn a talented guitarist’s vision into a relatable song for many, just as any praiseworthy blues album should. Nanji is proud, yet humble; successful, yet blind to the desire for fame. His Native roots remain at the forefront of his daily thought, and the desire to simply make good music, a lesson he learned from his father, makes his appeal a universal one.

Vanishing Americans opens up with “Everything You Need,” a song that erupts with a melodic guitar riff so catchy that it is sure to reel in the listener for the duration of the entire album. Following this track is “Lonely Road,” a track that sings to a broken and heavy heart that must face the path of life companionless – “Now it’s time to say goodbye / Head out on my own / It’s a lonely road.” In contrast, “Don’t Let Them Drive Away” is a reminder to his girl that, despite what others say, he will always stand by her; he doesn’t want her to be overly influenced by the tales of others, driven away by the stories of his past – “I need you here today / Don’t let them drive you away.” “Cold Hearted Woman” has a classic blues feel, calling his lady out on cheating and fooling around, while “Take Me Back” is a groovy, upbeat track woven with apologies and desire. “Can’t Cry No More” and “Now That the Sunshine is Gone” follow suit, lyrical reminders to move on from the past, while perfectly controlled guitar work supports the heartsick yet enlightened message.

“Don’t Be Afraid” and “In My Sights” combine upbeat, unique rock n’ roll rhythms and spirited memorable melodies in two celebratory tracks that embrace and delight in this perfect woman, while “Always With You” and “I’ll Keep Standing” are promising ballads of devotion with unforgettable tunes accompanied by heavy yet tasteful guitar solos. “Dark Days” is an apocalyptic track, referencing that these dark days will continue unless he changes his hindering and suppressing lifestyle and ways. Finally, “Moon Is Rising” is the final and most lengthy track on the album, closing the record with a powerful, rock n’ roll 8-minute tune and leaving the listener with something to hold on to.

Vanishing Americans was shaped and formed by Nanji in honor of his father, and is sure to be as influential on the blues rock scene as his father was on him. Impressive guitar solos, striking riffs, and velvety vocals make every song an explosive work of unleashed, humble talent, like firecrackers lighting up a reservation sky. His father must be undoubtedly proud, along with every blues fan cranking up his or her stereo, rocking out to this notable album worth recognizing and lending a musical ear to.